The Enigma Box was one of the most exciting projects on Kickstarter last year.  We just finished the 8 parts of the Basic Version (premium version has 3 more parts), and here is our feedback.

We started one week ago (we = 3 of us!) for the first 2-3 destinations, then Mathias finished it up his own. It took him approximately 12-15 hours for everything, but with a lot of « shortcuts » (maybe 20% of the puzzles). He’ll try to sum up my experience, listing the good and not so good sides of the game.

WHAT IS « THE ENIGMA BOX »?
The Enigma Box is an escape box, i.e. an investigation game inspired by escape games, but playable at home. It’s an amazingly complex project consisting in dozens of objects and documents all gathered in a mysterious black box, and using VR glasses to enhance the gaming experience.

WHAT WE LIKED
– The background texts, although not exceptional, are good enough and help immerse into the storyline.
– Some of the puzzles where pretty creative, both in conception and design.
– The gameplay is, most of the times, fluid and well thought out.
– The game elements are dope, starting with the box itself which is beautiful. All the documents, 3D objects, etc. are varied and really cool to manipulate. They don’t really feel cheap. We liked that they even used the goodies (t-shirt, pens…) to be included in the resolution of some of the puzzles.
– There is a good balance between IRL/virtual puzzles.
– A nice feature is that each of the coordinates is validated individually, which allows you to know exactly what you’ve done wrong.
– A lot of « escape boxes » don’t really allow you to play with more than 1-2 players, despite what’s advertised. With the EB, there’s clearly enough to get 3-4 players busy simultaneously.

WHAT WE DIDN’T LIKE
– Some of the puzzles don’t really work. Some of them because they just give unnecessary clues to other puzzles. All the « directional » puzzles (N, S, W, E) are so easy to bypass that it’s a pity they were not designed in a other way. Same goes with all the puzzles that offer multiple choice solutions, you can easily end up getting the right answer without having actually solved the puzzle. Some puzzles, even when knowing the solution, were just impossible to reverse engineer.
– The 3 « Telegram » puzzles at the end of each part are exciting at first, and then plain boring. Too repetitive. And most of them can be bypassed, especially the Anubis ones.
– We also felt that a couple of the puzzles were flawed, with typos or worse. We don’t want to spoil them here, but We’d definitely like to have the designers opinion on that matter.
– The VR glasses are cool, but a little gimmicky. Frankly it’s better to use the non VR browsing on a computer, especially if you play with friends.
– The translations are a bit clumsy (at least in French). Most of the times it’s no big deal, but the hints cards for example are really poorly translated (but even in Spanish, which we can read, we realized that they rarely offer significant hints).
– We would have liked some online stats about the other players: how many have logged in to the game, how many have already finished it or have reached such and such destination, etc. The app screenshots on the official website are way more appealing than the actual app: what happened there?
– The advertised « 6000+ minutes » of play are simply not true. Even without shortcutting the puzzles, I’d say it won’t go beyond 2000 minutes for the full Deluxe version (it’s still a long & intensive adventure though!)
– The lack of official forum to give feedback and exchange with other players.

FINAL THOUGHTS
Overall, despite the above rants, we quite enjoyed my time spent on the EB. It was frustrating at times, but a lot of escape/investigation/puzzles games are in a way, even smaller ones likes the « Exit » series. It was somehow worth the (steep) price and we’re glad to have backed it on KS. Imagining how complex such an intricate game design must have been, on all levels, kind of softens the criticism I can make.
Would we buy episode 2? At this stage, considering the price and the fact that there are more and more games in that « escape boxes » market, we’re not really sure. If the designers really work on the weakest mechanics of the game and ensure a better translation, then we would totally consider it.

SOME TIPS FOR BEGINNERS
– Don’t use the dice and the play by turn mode: it’s really pointless.
– Start with looking closely at ALL the elements in the box. We lost a LOT OF TIME because We just missed some of them, especially at the early stages of the game.
– Read the rules, more particularly the ones about the plastic figures. They’re not that easy to get right the first time.
– Be careful not to miss parts of the puzzles’ equations while looking at the Arcanum and the Passport. Some of them are scattered in different pages.
– Some of the puzzles are simpler than they appear.
– If you’re really stuck, know that each coordinate and keywords are related to the following destination. You can always brute-force some of the coordinates and try to reverse engineer later.
– The game is definitely re-playable by someone else. Just be careful not to break or tear anything, and be ready to photocopy the documents you need (this will happen at least on 3-4 occasions). 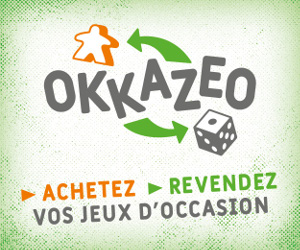